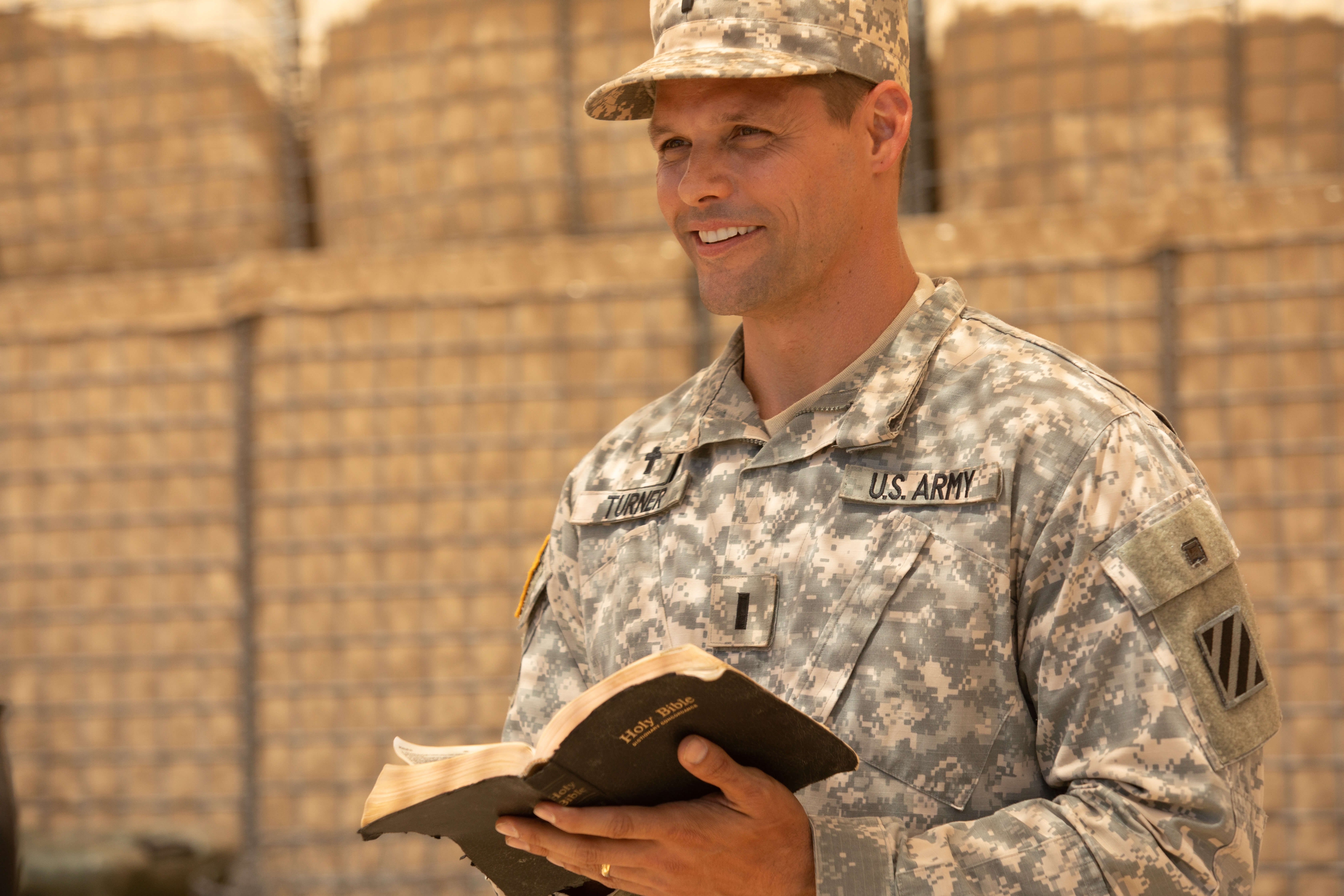 Photo Credit: CNS/courtesy Provident Films - Justin Bruening stars as U.S. Army Chaplain Darren Turner in a scene from the movie "Indivisible." The Catholic News Service classification is A-II — adults and adolescents. The Motion Picture Association of America rating is PG-13 — parents strongly cautioned. Some material may be inappropriate for children under 13.

“It is well that war is so terrible, or we should grow too fond of it.” So Confederate Gen. Robert E. Lee is supposed to have remarked while witnessing the magnificent panoply of massing troops at the onset of the Battle of Fredericksburg in December 1862.

The earnest, fact-based drama “Indivisible” (Pure Flix) concentrates on the negative side of Lee’s observation, showing the toll a much more recent conflict exacted on the life of Protestant Army chaplain Darren Turner (Justin Bruening).

While still new to his role in the armed forces, and without previous combat experience, Darren is assigned to care for a unit deployed on the dangerous outskirts of Baghdad as part of the 2007 surge of U.S. troops in Iraq. He goes off willingly enough, despite the somber warnings of Michael Lewis (Jason George), a soldier who has been in country before.

Back home, meanwhile, Darren’s dedicated wife, Heather (Sarah Drew), busies herself filling Christmas stockings for his charges and giving comfort to the wives of the wounded and fallen. (“Indivisible” represents something of a reunion for Bruening and Drew, both of whom appeared on ABC’s “Grey’s Anatomy.”)

But Darren’s experiences of battle and loss eventually leave him suffering from post-traumatic stress disorder and increasingly alienated from his family. He also undergoes a crisis of faith.

Though perhaps more admirable than engaging, director and co-writer David G. Evans’ movie effectively conveys the experience of many servicemen and women during and after their time in Iraq or Afghanistan. It also presents the portrait of a strong and durable marriage while sincerely exploring issues of doubt among the faithful.

Besides scenes of fighting integral to the story, moreover, the script — on which Evans collaborated with Cheryl McKay and Peter White — includes little to which parents could object. In fact, teens might benefit from “Indivisible,” especially if it inspires a family discussion about the Christian emphasis on peace.

The film contains stylized combat violence with minimal gore, mature themes and references to an out-of-wedlock pregnancy. The Catholic News Service classification is A-II — adults and adolescents. The Motion Picture Association of America rating is PG-13 — parents strongly cautioned. Some material may be inappropriate for children under 13.