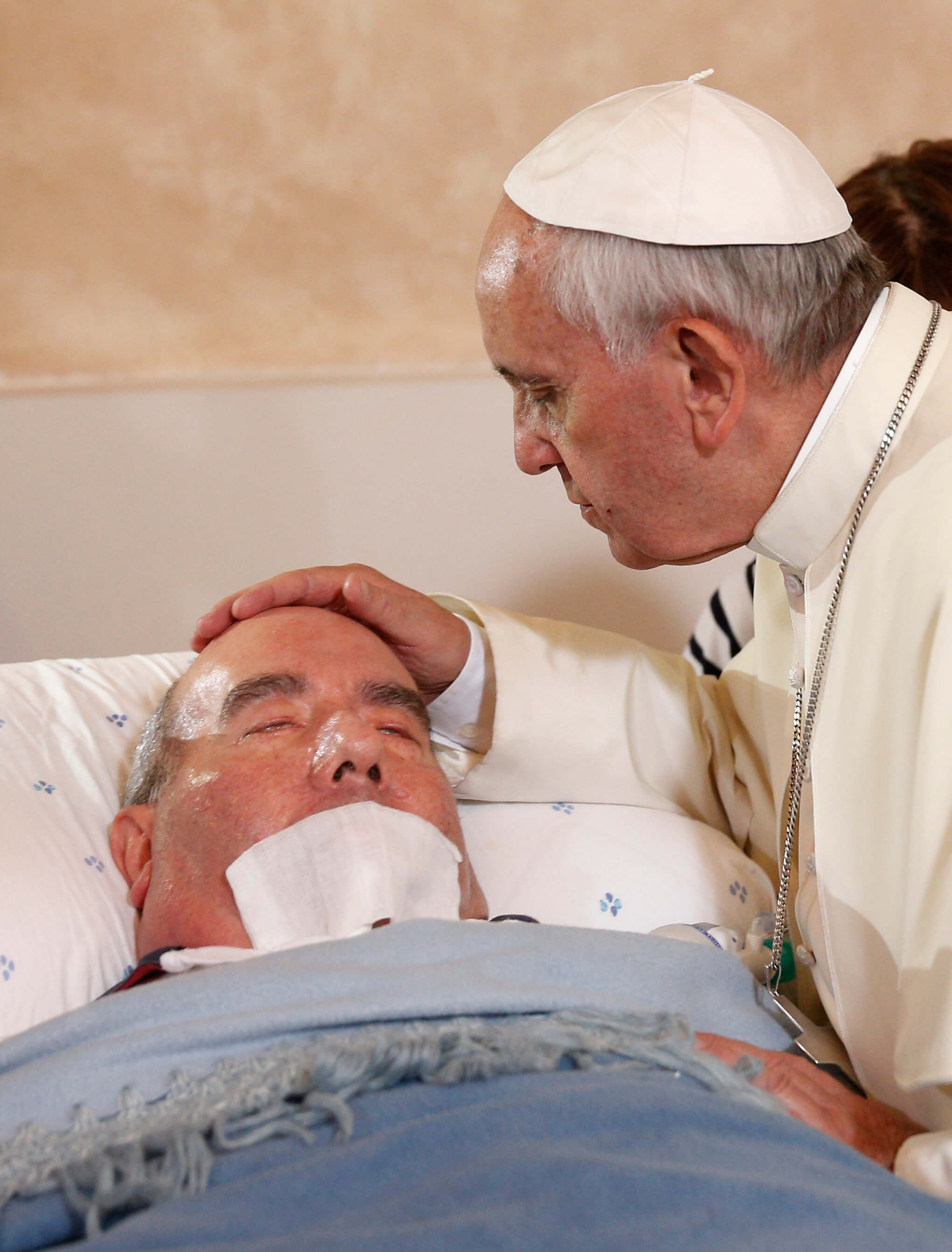 Photo Credit: CNS /Paul Haring - Pope Francis blesses a sick man inside the Basilica of Our Lady of Bonaria in Cagliari, Sardinia, in this file photo. Deacon Gummere writes, "As followers of Jesus, we are called to extend compassion and support to the suffering.

In June, the U.S. Center for Disease Control reported that suicide rates throughout the United States had risen by 25 percent in two decades. Many states saw increases in suicides of more than 30 percent. In Vermont, the percentage was among the highest in the nation, with a 48.6 percent increase from 1999 to 2016. Nationally, suicide results in about 45,000 deaths annually making suicide a significant health problem.

The mainstream media, public health officials and the mental health establishment focus on explanations that might be found in pre-existing mental illness, social isolation, bullying, socio-economic factors, substance abuse and even the availability of firearms. These are each a fertile and important area for study and suicide prevention work.

However, two distinct areas that are not being discussed are the relativistic morality that has taken hold of American culture and the widespread apostasy that has happened in recent decades.

The erosion of shared moral norms has contributed to the rampant violence that plagues society. It has enabled American society to embrace such affronts to human life as abortion and assisted suicide. These practices have diminished the sanctity of human life in the minds of much of society, which has come to accept suicide as a means to eliminate physical and mental suffering.

Consequently, some rationalize suicide as a remedy for the suffering of the mentally ill individual, the bereaved surviving spouse, the jilted lover, the financially overwhelmed person or the teenager unable to cope with cruelty of other youngsters.

A hopeless person perceives his or her own life as not mattering. Despite such genuine suffering, suicide is never a morally acceptable option.

As followers of Jesus, we are called to extend compassion and support to the suffering.

From a theological point of view, we know that hope is a theological virtue that tells us something about God and our relationship with God. We are certain that the promise of eternal life with the Trinity is genuine, and by cooperating with God’s grace, we will attain eternal life.

So many in our culture have completely turned away from religion in any form. In recent decades, western civilization including the United States has undergone a large-scale apostasy. There has been a major turning away from God in our country. This takes on a variety of nuances: atheism, agnosticism and nihilism. Moving beyond the statistics that have been covered by the media, there is another statistically significant finding from a number of studies in the medical, psychological and social science literature. Suicides among religious people in the United States are at a far lower rate than the population at large. Our mission as the Church is to share the Good News of salvation through Jesus Christ. To do this we assure others that they are welcome, and we help them become part of the Church community.

The power of God to save is infinite. God’s power to protect individuals from tragedies like suicide is also infinite. That power truly can be mediated through the Church; that is to say, through all of us.

Deacon Pete Gummere is a bioethicist and adjunct faculty at Pontifical College Josephinum and Theology Instructor at St. Therese Digital Academy. He serves at Corpus Christi Parish in the St. Johnsbury area.