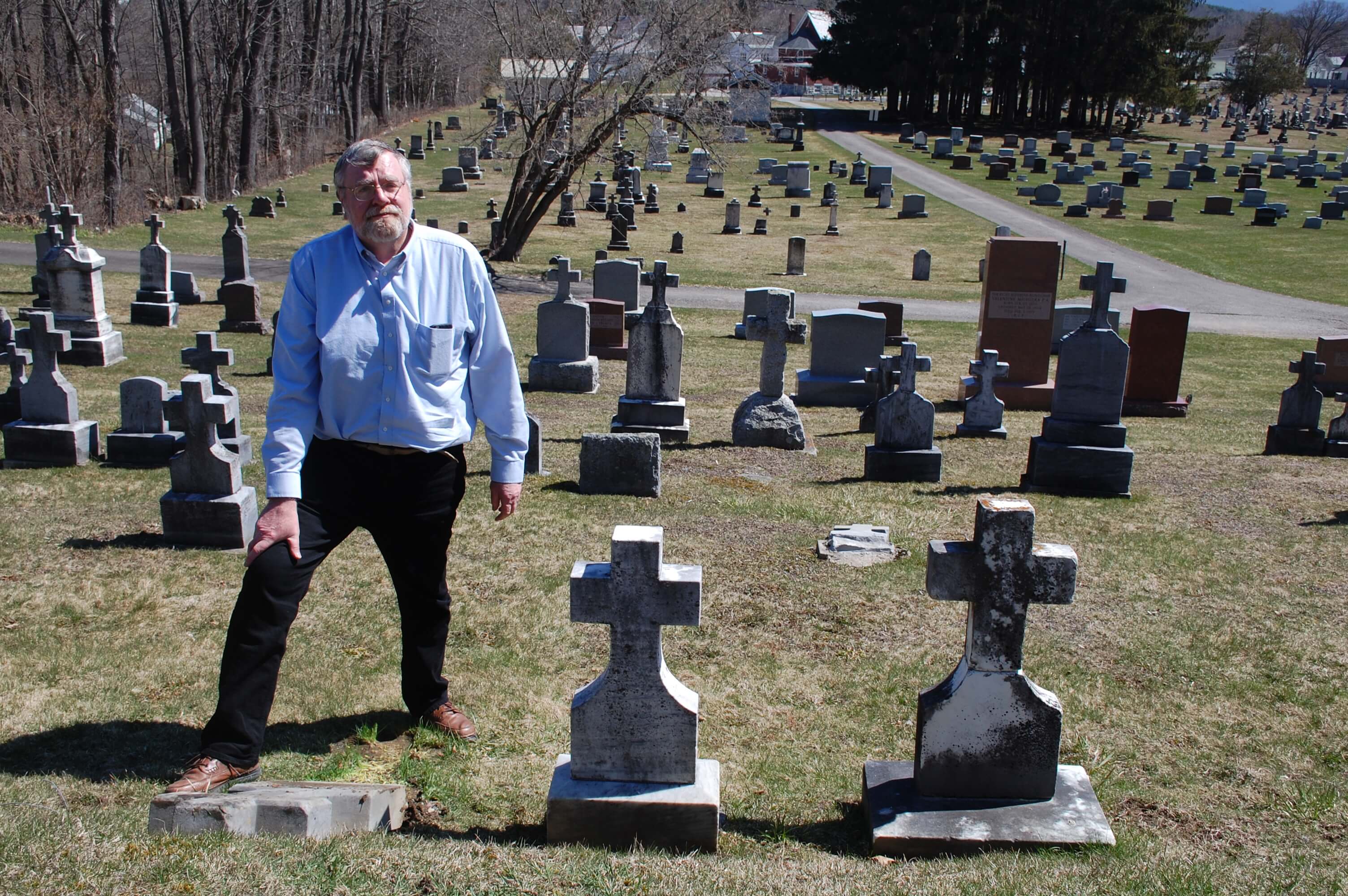 For Thomas Giffin, the history of Vermont is buried in its cemeteries.

“The people who made that history are [buried] in those cemeteries,” he said as he stood in an old Polish section of St. Bridget, St. Stanislaus Kostka, Sacred Heart of Jesus Roman Catholic Cemetery in West Rutland. “That’s why we should maintain them. It’s [showing] respect.”

Giffin, a parishioner of Immaculate Heart of Mary Church in Rutland, is president of the Vermont Old Cemetery Association, has volunteered his time to help refurbish numerous cemeteries by repairing and uprighting broken and toppled monuments, most more than 100 years old.

He has worked in cemeteries in various localities including Danby, Sudbury, South Wallingford, Manchester and Rutland. This summer he has projects slated in Tinmouth and Bridgewater.

In years passed he has done cemetery work on at least one weekend day from June to the beginning of deer hunting season, though he no longer hunts. Volunteer crews assist with the work that include using an epoxy glue to affix broken pieces of stone back on monuments.

The biggest issues in the cemeteries are vandalism and weather. While some monuments are toppled by human mischief, others succumb to the ravages of acid rain and nature.

Marble stones are those affected the most because they are not as tough as those made of granite. “This is the Marble Valley,” known for its marble deposits, Giffin said of the Rutland area. Thus most of the stones in the old section of the cemetery are made of the marble quarried nearby. “Barre granite can withstand the Vermont environments better because it’s a harder stone.”

Some grave stones need to be cleaned, either because they have been toppled and covered in dirt or because lichen has grown on them. Giffin said the old cemetery association does not recommend power washing but instead the use of an environmentally friendly cleaning agent.

The assistant superintendent of Marble Valley Correctional Center in Rutland, Giffin was approached about cemetery work last year by St. Stanislaus Kostka parishioner Mary Reczek after they worked on another cemetery project.

“It had bothered some of us for many years that there were markers in the old part of the cemetery…that had toppled over,” she said. “We’ve always had a super sensitivity for those who have passed before us and a respect for what they did.”

Last fall about 15 volunteers — most parishioners of St. Stanislaus Kostka Church — repaired more than 25 monuments — most of them marble — but by spring frost and weather had toppled at least three more that Giffin made a mental note to repair.

“It is important to maintain all memorials in our Catholic cemeteries especially the oldest because they represent a part of the history of the Catholic Church,” commented Robert Brown, director of cemeteries for the Diocese of Burlington. “Mr. Giffin has taken the lead in restoration of many old monuments and memorials with the assistance of the Old Cemetery Association. They offer guidance and grants to do this delicate work. We are very fortunate to have this group of very dedicated individuals.”

It is satisfying for Giffin to look at the cemetery after stones are repaired. “It’s sacred ground,” said the member of the Mayflower Association and the Sons of the American Revolution. “I tell the volunteers to be mindful, humble, and realize what we’re doing is restoring somebody’s resting spot.”

Victorian-era cemeteries were like parks with benches and fountains where people often visited and lingered. But today, people are “very mobile” and don’t usually take the time to visit cemeteries, he lamented, and more and more people choose cremation and the scattering of ashes.

Vatican guidelines state that cremated remains should be kept in a “sacred place” such as a church cemetery.

The cemetery commissioner for the City of Rutland, Giffin remembers walking through cemeteries with his mother, Shirley Gee Giffin, as she worked on her family’s French Canadian genealogy. Later he enjoyed doing gravestone rubbings and appreciated the artwork and epitaphs on them and the history they revealed.

There are more than 1,900 cemeteries in Vermont.

For more information on the Vermont Old Cemetery Association, go to VOCA58.org.