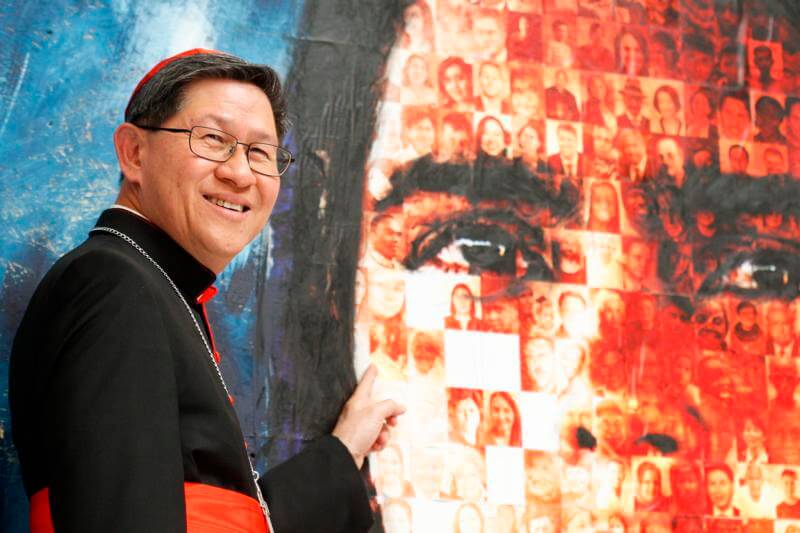 Photo Credit: CNS/Robert Duncan - Philippine Cardinal Luis Antonio Tagle of Manila, president of Caritas Internationalis, points to a photo of his maternal grandfather who emigrated from China to the Philippines. During a Vatican news conference May 23 the cardinal added the photo of his "Lolo Kim" to the mosaic made of the faces of migrants, world leaders and Caritas staff members from throughout the world. The mosaic was created for the general assembly of Caritas Internationalis.

Philippine Cardinal Luis Antonio Tagle added a photo of his “Lolo Kim” to a mosaic of migrants, world leaders and Caritas workers to illustrate how humanity forms one family and is sharing one journey.

The mosaic, now including the cardinal’s maternal grandfather who immigrated to the Philippines from China, was unveiled May 23 at a Vatican news conference beginning the May 23-28 general assembly of Caritas Internationalis.

The assembly brought together some 450 delegates from more than 150 national Catholic charities from throughout the world to focus on the theme “One Human Family. One Common Home.”

Cardinal Tagle, Caritas president, told reporters the theme “isn’t a slogan,” but rather an affirmation of the Gospel, of Catholic social teaching, of the teaching of modern popes and, particularly, “an affirmation of the lived experience of Caritas,” its staff and volunteers around the world.

“We are part of one human family,” he said. “We share the same humanity and when we set off on a journey, we discover we have the same dreams, the same desire for a future for our children and for a more just world. We are a family.”

Being part of one family, the cardinal said, also means sharing responsibility for the family home, which is the earth. Efforts to protect human beings and protect the environment at the same time are part of what the Catholic Church calls “integral ecology.”

Michel Roy, who is completing his second four-year term as Caritas secretary-general, said the experience of Caritas Internationalis and its aid and development partners around the world is that climate change is displacing people, especially the poor, and making natural disasters more severe.

“In the coming decades, you will see millions of people who cannot survive where they live now,” because they can no longer grow food or because their land is under water, Roy said.

Cardinal Tagle said that in the Philippines, the expression “June bride” was common because June was the most popular month for weddings. “No more,” he said, because typhoons and monsoons have become common in June.

Traveling around the world as Caritas president, he said, skyscrapers and fancy shops and other signs of economic growth are seen in many places, but so are people who are poor.

“As wealth is produced, you wonder why the number of poor people increases,” he said. Because economic growth and development projects are not keeping a middle-class strong and helping the poor, “there are a lot of angry people — angry and suspicious” — around the globe.

“The astute politicians and business people know that anger and so they present themselves as messiahs. And they win elections, even if they were the ones who benefited from that type of distorted development,” the cardinal said.

In many parts of the world, that anger has contributed to the election of politicians promising to stop immigration, the Caritas leaders said.