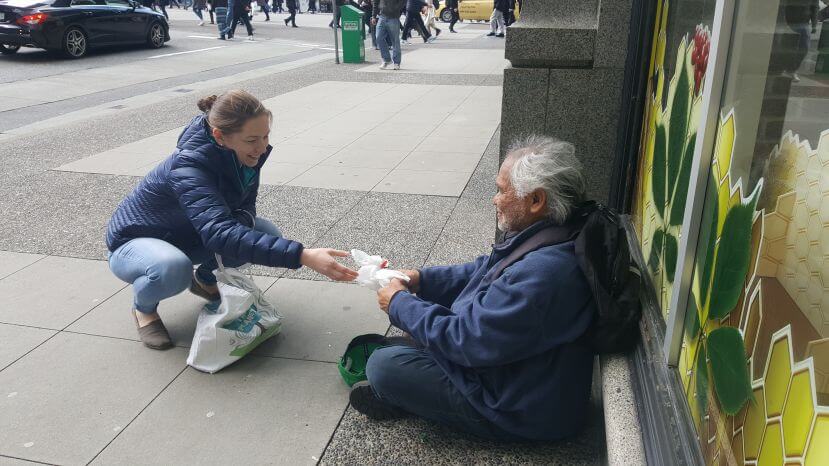 Sacrificial ministry is incomplete without the cross

Caution: This article concerns working with the poor, the homeless, the mentally ill and addicts. If your experience of this kind of ministry is limited to the occasional conference talk on social justice in an air-conditioned building, bolstered by small group discussions followed by a tasty lunch, you won’t appreciate it.

If you have hands-on experience with the above-mentioned population, who rejected your good intentions at “helping them,” then you will understand the Gospels in their complexity and entirety.

For most Christians, the seminal Gospel passage often quoted regarding social justice and ministry to the poor is Matthew 25:35-40: “I was hungry and you gave me food, I was thirsty and you gave me drink, a stranger and you welcomed me, naked and you clothed me, ill and you cared for me, in prison and you visited me.’ Then the righteous will answer him and say, ‘Lord, when did we see you hungry and feed you, or thirsty and give you drink?  When did we see you a stranger and welcome you, or naked and clothe you? When did we see you ill or in prison and visit you?’ And the king will say to them in reply, ‘Amen, I say to you, whatever you did for one of these least brothers of mine, you did for me.’”

This Gospel makes clear the various acts to be performed, but the sacrificial act of ministry is not complete without the cross. For ministry to be fruitful the mystery of the cross looms behind every act of charity. An act of love, met with the rejection of the intended recipient, if united with the suffering of Jesus on the cross, can produce spiritual fruit more efficacious than any pious sermon on the preferential option for the poor.

Remember what happened to Jesus in John 5:1-16 when He bestowed two healings on the man at the Pool of Bethesda who had been paralyzed for 38 years? The man is healed but nonetheless intentionally betrays Jesus to the authorities for having told him to carry his mat on the Sabbath which led to an intensified persecution of Jesus.

Jesus’ act of charity is met with ingratitude, betrayal and suffering. But, did Jesus stop healing the sick? No.

So, what do you do when the sandwich you offer the hungry man is thrown with contempt in the garbage? You still feed the hungry. When the water you offer the thirsty one is left behind for alcohol? You still give water to the thirsty. When the clothes you offer the poor family are exchanged for drugs? You still give clothes to the poor. When you offer kindness and compassion to the mentally ill or addicts and they calumniate you? You remain kind and compassionate. But, most importantly, you pray to the Father from the depths of your soul uniting your frustration, hurt feelings and misunderstood intentions to Jesus so that He may elevate those acts of charity to the supernatural heights of mercy which we alone, without the cross, are unable to accomplish.

From those heights a shower of grace descends upon the poor, which a mere sandwich, bottle of water, pair of boots or kind smile was unable to achieve by itself. Such is the complexity of social justice and ministry to the poor. Not every recipient of charity is ungrateful, obviously. And many will be kind, pleasant and enjoyable. But don’t let those who betray you and hurt your feelings stop you from performing the good works of the Kingdom.

Jesus didn’t stop. And neither did the saints.

–Originally published in the Winter 2017 issue of Vermont Catholic magazine.